Iowa could be getting a small number of Syrian refugees next year, according to the governor.  Governor Branstad says welcoming the displaced Syrians is a good thing, as long as they’re thoroughly vetted first.  He also wants to make sure the state is informed in advance of their arrival. 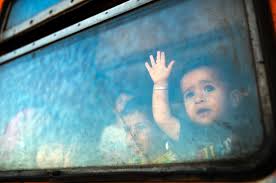 Deere and Company reached a tentative agreement with the UAW to replace its expiring contract with another 6-year deal.  10-thousand workers are covered by the new agreement, including those at the Ankeny and Ottumwa facilities.  The membership still has to vote on it.

Polk City is looking over public safety options.  A special panel is considering several ways to keep the city safe affordably, including getting rid of the police department and outsourcing to the county, or expanding the force. The city’s population has doubled since 2010.

Iowa’s Department of Public Health is launching an “Iowa Get Screened” program to make folks more aware of the need to be tested for colorectal cancer. Jeanna Jones from DPH says colorectal cancer is one of the few cancers you can prevent through screening.

Trauma patients will be able to get a different ride into Iowa hospitals.  UnityPoint Health LifeFlight and Air Methods Corporation will be offering air service to those patients on a plane that can make it through rough weather when a helicopter is grounded.  Crews are training for the craft at Des Moines International Airport.

Federal ag officials now say reusable totes were probably the carrier of the virus that killed more than 8 million baby pigs over the past two years.  The bags carry up to 3-thousand pounds of bulk items from foreign countries, including feed, and they often were not cleaned between uses.

A conflict of schedules has forced an Iowa trade mission to Cuba to reschedule.  The delegation was supposed to go this week, but Cuban officials are meeting with the U-S Commerce secretary.

DMACC and central Iowa employers are teaming up to create a certificate program that encourages more women to get into information technology professions.  The Diversity in Application Development program includes women who work for area companies that often cover the cost of tuition for their workers.

ISU professors are rated among the highest in the nation in overall quality in a new survey of students.  The website RateMyProfessors ranked it 16th in the country.  Iowa State was the only Iowa school to make the list.