Deere and Company workers will get a first look at their new contract on Sunday, when they meet to vote on it. The six-year pact was announced just an hour after the old six-year deal expired.  The agreement covers 10-thousand workers at 12 factories, including the ones in Ankeny and Ottumwa. 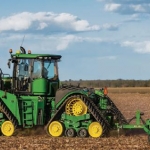 NewLink Genetics in Ames is getting another multi-million dollar award from the feds to support its Ebola research. Co-founder Chuck Link says they’ve also found a new treatment to combat an aspect of cancer….such as melanoma.  If trials continue as expected, Link believes they can get the product out on the market by 2017.

A senate panel has voted down an amendment that would have ended the corn component of the renewable fuel standard.  The head of the National Corn Growers Association says the amendment would have taken away consumers’ choices at the gas pump and increased our dependence on foreign oil. Not to mention what it would do to farmers and renewable fuel producers.

It appears that an Iowa trade mission to Cuba that was supposed to take place this week will happen in December.  An embassy official the Iowa delegation was working with will be in Cuba this week to make arrangements for the meetings.  The original meetings were postponed because of the Pope’s visit.

The city of Clive wants to get feedback from residents on its greenbelt plan.  A special meeting at the Clive Events Building is set for October 7th.  It will feature both proposals for Walnut Creek improvements for water quality and recreational opportunities, and a masterplan for the Clive Greenbelt along the creek.

Some Beaverdale neighbors are objecting to a proposal for an assisted living project on Beaver Avenue.  The same group had objected to a different senior housing project on Rice Field, just down the road from where the new 78-unit facility would go.  One of their fears is that it will turn the area into an aging community.

Polk and Jasper counties are seeing a good harvest so far, with drier weather giving farmers a strong start.  They’re trying to gather their corn and soybean crops as quickly as possible, to get them into the bin.  Some farmers say moisture is too high in some areas to bring in all the corn.

The countdown has started…the Riverfront YMCA tumbles down on Sunday a little after 7 in the morning. The contractor in charge of imploding the more than half-century-old building says it’ll only take about 8 seconds for it to drop.

Tomorrow is Shred Day for 5 cities in Iowa.  Veridian Credit Union will shred documents for free at its Ankeny and West Des Moines branches, and Goodwill will take unwanted computer equipment to be recycled or refurbished.

Cat lovers will be flocking to the Iowa State Fairgrounds this weekend for the Annual Cat Show at Elwell Food Center.  More than 32 breeds will be competing.