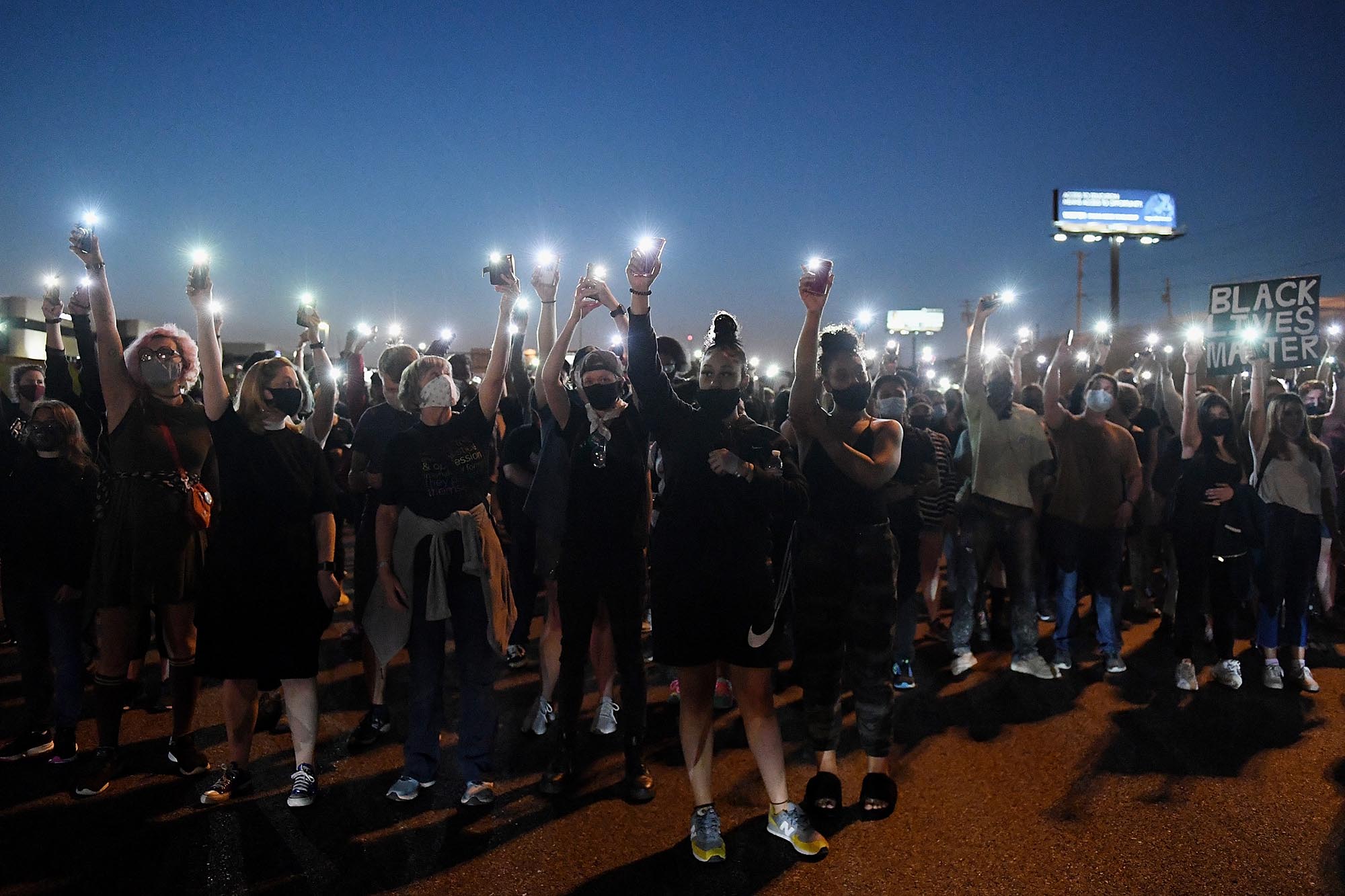 Protesters demanding justice for Breonna Taylor walked in the streets of Louisville for a third night, their march briefly interrupted then turned around by lines of police.

As the marchers moved along Main Street shortly before 7 p.m. ET Friday, police officers set up restraining lines in front of them and on a street to the left. Several flash bang devices exploded above the crowd.

Timothy Findlay, a pastor who organized a protest earlier this month at at the site of the Kentucky Derby, said police had no reason to use the stun grenades.

“We were nonviolent. We were peaceful,” he told CNN’s Jason Carroll. “We were exercising our constitutional right.” He said there were seniors and children in the crowd.

An official with the Louisville Metro Police Department said officers shot two flash bangs in the air because the crowd was told to move onto sidewalks and did not.

Sgt. Lamont Washington said an unlawful assembly was declared after the protesters stayed in the streets, and the stun grenades were used to get their attention.

Two people were arrested, he said.

Protesters used another route to head back to Jefferson Square Park, where the march began. After staying their for a short time, marchers returned to the grounds of the First Unitarian Church, the scene of a nearly two-hour long peaceful standoff Thursday night.

At the front of a march, Austin and several women held a purple banner with Taylor’s image and the words “Justice for Breonna” as Palmer walked with the crowd.

Many in the throng raised their right fists and the crowd chanted, “Say her name.”

Breonna’s mother: ‘I am an angry Black woman’

Earlier, at a news conference, Taylor’s mother said the grand jury’s decision “reassured” her of why she has no faith in the legal system.

Palmer wrote a letter that she read Friday during a fiery news conference at which her attorneys called on Kentucky’s attorney general to release the transcript of the grand jury proceedings relating to Taylor’s death.

“I was reassured Wednesday of why I have no faith in the legal system, in the police, in the law — that are not made to protect us Black and Brown people,” Palmer wrote in a letter read by her sister, Bianca Austin.

“I am not angry for the reasons that you would like me to be. But angry because our Black women keep dying at the hands of police officers.”

Protests erupted in Louisville and across the country after Kentucky Attorney General Daniel Cameron announced Wednesday that a grand jury did not charge three officers directly with Taylor’s death, more than six months after police shot her in her home while executing a search warrant.

The grand jury did indict one detective on first-degree wanton endangerment charges, accusing him of blindly firing shots that went through Taylor’s home and penetrated the walls of a neighbor’s apartment.

The FBI has said it is separately investigating Taylor’s death.

At Friday’s news conference, an attorney for Taylor’s family, Ben Crump, called on Cameron to release the transcript of the grand jury proceedings.

“Breonna Taylor’s entire family is heartbroken … and confused and bewildered, just like all of us, as to what did Kentucky Attorney General Daniel Cameron present to the grand jury,” Crump said at Louisville’s Jefferson Square Park.

“Did he present any evidence on Breonna Taylor’s behalf, or did he make a unilateral decision to put his thumb on the scales of justice to help try to exonerate and justify (the killing) by these police officers?” Crump said.

“Release the transcript!” Crump said repeatedly, leading a crowd in a chant.

Palmer also wrote that she “never had faith in Daniel Cameron to begin with.”

“I knew he had already chosen to be on the wrong side of the law the moment he wanted the grand jury to make the decision,” Palmer’s letter reads, according to Austin. “What I had hoped is that he knew he had the power to do the right thing.”

“He helped me realize that it will always be us against them — that we are never safe when it comes to them.”

Earlier, Crump said he is counting on the federal probe for justice.

“We hope the FBI investigation finally gets justice for Bre and her family,” Crump tweeted.

After another night of protests Thursday, Louisville’s mayor said he is extending the city’s curfew through the weekend to balance people’s “rights to peacefully protest with the duty to protect public safety.”

On Thursday night, after a standoff between the Louisville Metro Police Department officers and protesters on church property, police moved out to allow protesters to go home.

At least 24 people were arrested in the city, Louisville police said. Some people from the protest broke windows at a restaurant, damaged some public transit buses, and tossed a flare into a library, breaking windows there, police said.

During a protest Wednesday night, two Louisville police officers were shot and suffered non-life-threatening injuries, police said. Both are expected to recover, according to interim Police Chief Robert Schroeder.

A 26-year-old suspect has been arrested. He faces two counts of first-degree assault of an officer and 14 counts of wanton endangerment of a police officer.

What led to Taylor’s death

The incident that ended Taylor’s life began with a narcotics investigation on March 13.

Taylor was sleeping next to her current boyfriend, Kenneth Walker III, in the early hours of March 13, when they heard a noise, he told investigators. They both got up and walked to the door.

“She’s yelling at the top of her lungs — and I am too at this point — ‘Who is it?’ ” Walker recalled to investigators. “No answer. No response. No anything.”

Police forced entry into the home, and Walker said he couldn’t see but he fired one shot. After entering, Mattingly was shot in the leg, Cameron, the attorney general, said Wednesday.

Hankison was accused by his own department of blindly firing 10 bullets into Taylor’s apartment from an outdoor patio. Hankison was fired in June, the Louisville police chief said, and is appealing his termination.

Cameron argued the officers were “justified in their use of force” because Taylor’s boyfriend fired first.

Hankison was booked in the Shelby County Jail, posted a $15,000 bond and was released, Matthews said.