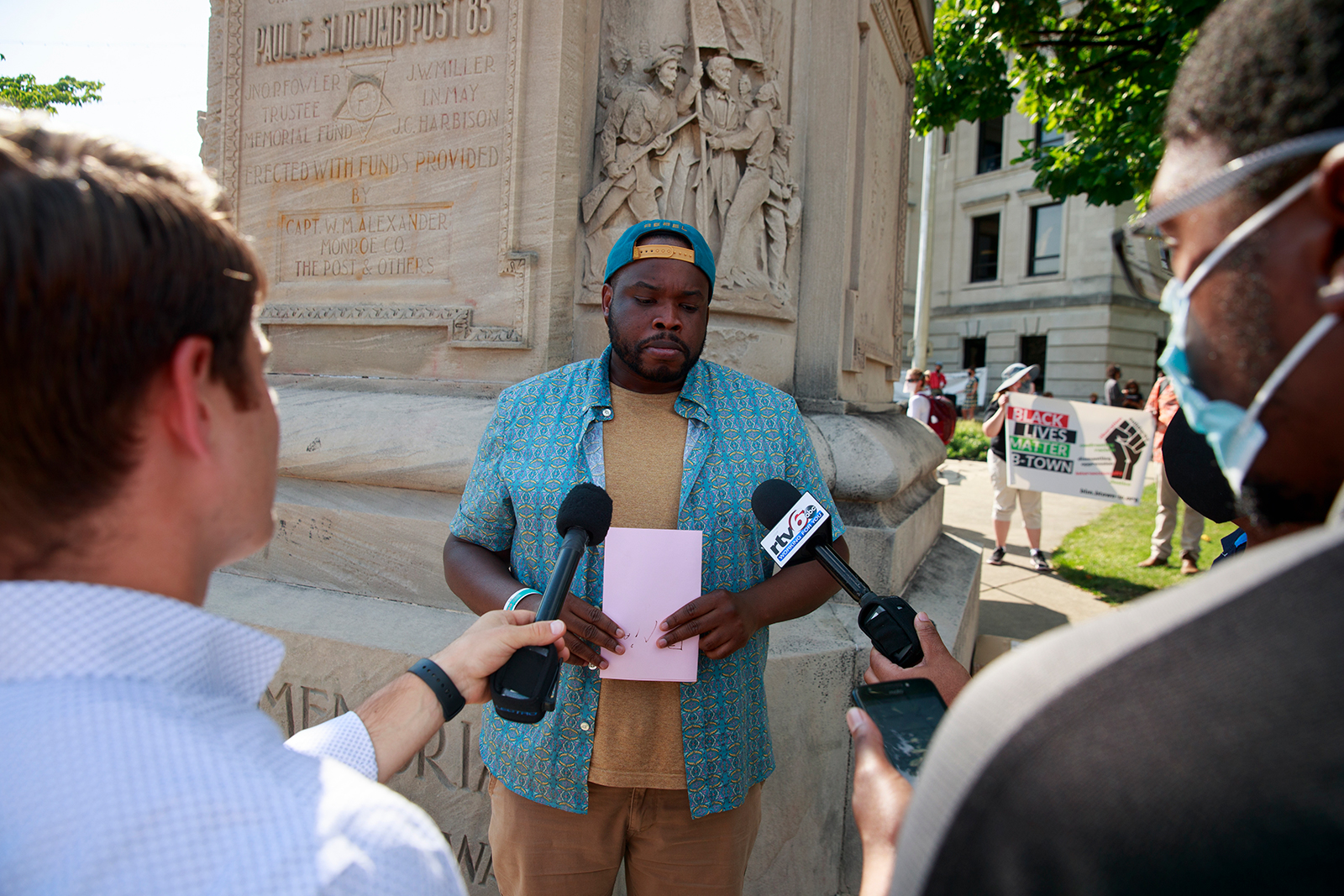 The FBI is investigating an incident over the Fourth of July weekend in which an Indiana man says he was the victim of a racist attack involving threats of a noose.

“Without these folks, I would be a hashtag,” said Booker, who is a member of both the affordable housing and human rights commissions in Monroe County, Indiana.

“Believe it or not, things are moving, and moving rather rapidly considering it’s the criminal justice system. Unfortunately, they did not move rapid enough on Saturday night,” said Liell.

What began as a lunar eclipse viewing party

In a detailed Facebook post Sunday, Booker, a Black man, recounted being harassed and attacked by five White men Saturday evening in an incident he said left him with a minor concussion, bruises, and patches of hair ripped out.

Booker said he and a friend entered what they said is a public park to attend a lunar eclipse viewing party at Lake Monroe, south of Bloomington, when one of the five men, who they say appeared drunk and wearing a hat with a Confederate flag on it, began following them and telling them they were on private property.

“We later found out that these individuals had blocked off the public beach way with a boat and their ATVs claiming that it was also their land. When folks tried to cross, they yelled, ‘white power’ at them. Honestly, we thought it might just be the one drunken individual with the Confederate hat we had encountered earlier who might be instigating the conflict. We decided to just walk back and attempt to simply have a conversation with some of the more sober seeming group members and see if we could smooth things over a bit,” Booker posted.

The individuals Booker and his friends tried to speak with were “calm for a moment then quickly became aggressive,” Booker described in his post before, he says, he decided to leave the location.

CNN has not been able to independently confirm what had led up to the incident that Booker has described in his Facebook post and at a press conference Tuesday. Videos posted by Booker do not show what led up to the confrontation.

Booker continued, “The five were able to easily overwhelm me and got me to the ground and dragged me pinning my body against a tree as they began pounding on my head and ripped off some of my hair.”

CNN has reached out to individuals believed to be captured in videos of the incident restraining Booker or part of that group.

‘I thought my friend would get killed’

On Tuesday, at least three witnesses to the confrontation described the events of Saturday evening.

Ian Watkins accompanied his friend Booker when he first approached the group. He said when he tried to pull one of the men off of Booker, he too was punched and shoved to the ground. Watkins told CNN he heard one of the men say something to the effect of, “Let’s get a noose and take care of this boy.”

“I was horrified and terrified. I thought my friend would get killed,” Watkins said.

Steven Cox, another friend of Booker’s, said he heard one individual tell Booker’s friends they could go but they would have to leave the “boy” there, saying that he thought Booker would have been killed if they’d left him there.

Brennan Golightly, who said he had only met Booker once before Saturday night, told CNN on Monday that he never heard the word “noose” mentioned during the incident.

In the videos posted to Booker’s Facebook page of the alleged incident, there is no audible mention of a noose nor any indication a noose was present.

Eventually, Booker was released, and he and his friends walk away from the scene. Video that appears to have been taken at that time shows a man calling Booker a “nappy headed b*tch.”

As both groups part ways, one woman can be heard yelling at Booker, “you are a poor county official” and “do not abuse your powers again, m*therf**ker.”

Both the Monroe County Prosecutor’s Office and Department of Natural Resources (DNR) are also investigating the matter, with DNR taking the lead on the investigation.