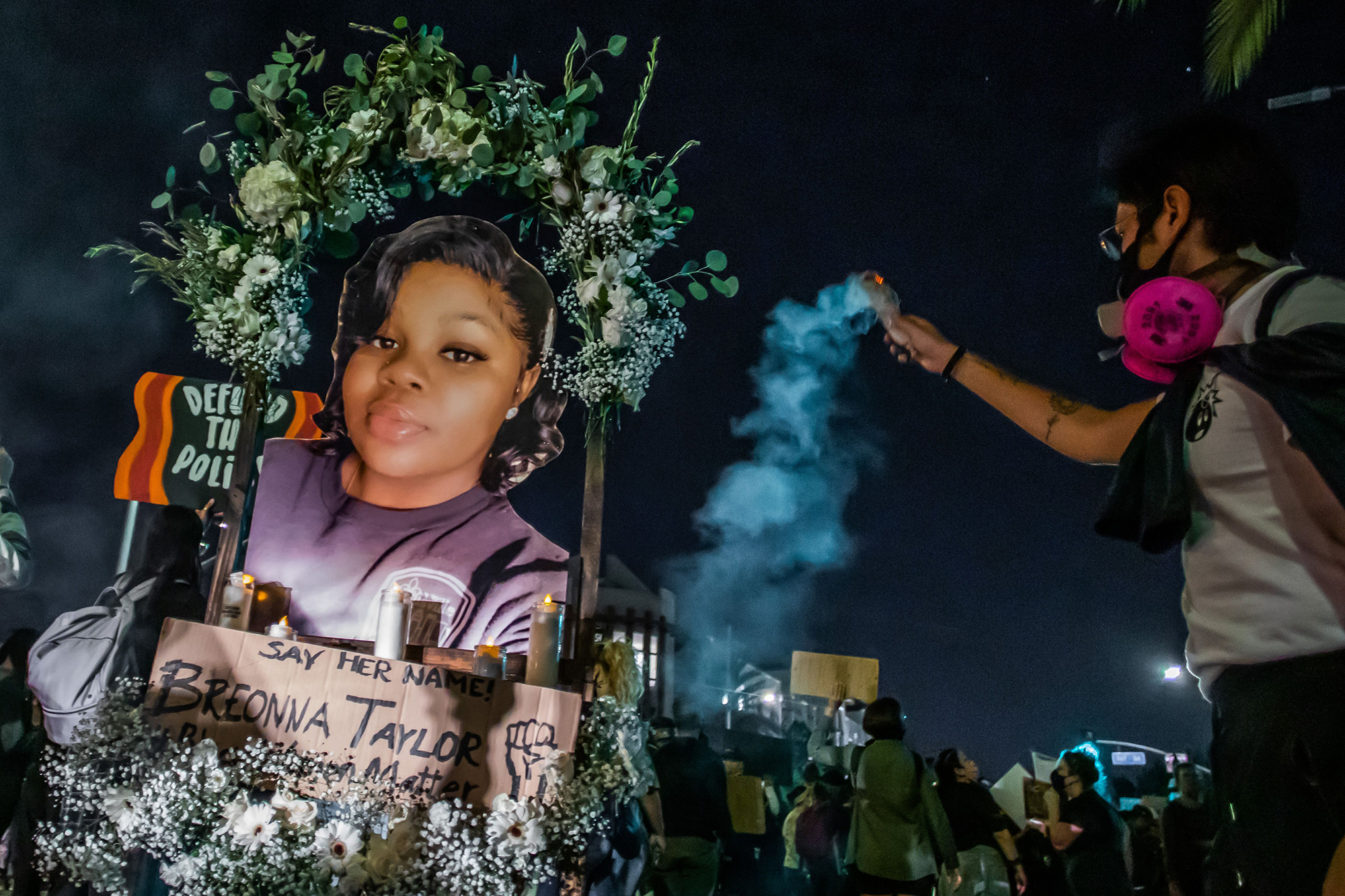 More than six months after Louisville police fatally shot Breonna Taylor during a botched raid, protesters have poured into the streets to insist that only murder charges against the officers would amount to justice.

A Kentucky grand jury on Wednesday indicted one of three officers involved on lesser felony charges of first-degree wanton endangerment. No officer was charged with killing Taylor, whose death has become a rallying point across the country for protesters against racial injustice and police brutality. “Say her name,” the demonstrators chant.

“I understand that Miss Breonna Taylor’s death has become a part of a national story and conversation,” Kentucky Attorney General Daniel Cameron said in announcing the grand jury’s decision.

“But we must also remember the facts and the collection of evidence in this case are different than cases elsewhere in the country. Each is unique and cannot be compared.”

Still, there is a common thread: Officers rarely stand trial or are convicted for crimes connected to lethal encounters while on duty.

About eight officers a year have been arrested and charged with murder or manslaughter for killings in the US since 2005, according to Philip Stinson, a professor of criminal justice at Bowling Green State University in Ohio. Around 1,000 people a year are shot and killed by law enforcement across the country.

“The fact of the matter is that in most of these incidents investigators and prosecutors ultimately determine that the officer was legally justified in using deadly force,” Stinson said.

“The other thing is prosecutors are very reluctant to bring charges against an officer because they don’t think they’re going to be able to obtain a conviction.”

Only 44 of the 121 officers who faced murder or manslaughter counts in the last 15 years have been convicted, according to Stinson. Those convictions are often for lesser offenses. There are 26 cases still pending.

That’s a 46% conviction rate compared to the 70% reported by the Bureau of Justice Statistics for US felony defendants originally charged with murder.

Racial bias is inherent in law enforcement and the court system, according to experts. From stop-and-frisk policies and arrests for low-level crimes to mandatory minimums in sentencing, the policies, procedures and laws underpinning the justice system disproportionately affect people of color.

“You can’t get away from the issues of systemic racism in the criminal justice system, but it’s bigger than that because it’s just everything about policing and urban communities — systemically, everything’s broken,” Stinson said.

And the high legal threshold for bringing charges against law enforcement historically favors the police.

The standard most departments use is based on a 1985 US Supreme Court opinion, though agencies are free to make their own rules and many do. Otherwise, deadly force may not be used “unless it is necessary to prevent the escape and the officer has probable cause to believe that the suspect poses a significant threat of death or serious physical injury to the officer or others,” according to the 1985 case called Tennessee v. Garner.

Taylor case ‘a tough one’

“This isn’t as clear cut as some of the other [police-involved shooting] cases,” he said.

But the charges are not related to the actual death of the 26-year-old Black emergency room technician and aspiring nurse. Instead, the officer is accused of firing blindly into Taylor’s apartment.

Wanton endangerment is a Class D felony, the lowest of four classes. The maximum sentence is five years; the minimum is one year. A Class A felony — for example, a murder charge — carries a sentence of up to 50 years or life, and a minimum sentence of 20 years.

Hankison intends to plead not guilty, according to his attorney, Stew Matthews, who said the evidence does not support the charges against his client. The ex-officer was fired in June but he is appealing his termination.

Officers ‘can’t just stand there and get killed’

The incident began with a narcotics investigation on March 13.

Taylor was sleeping next to her boyfriend, Kenneth Walker III. When they heard a noise, the couple got up and walked toward the door.

Police broke into the home. Walker fired one shot. Mattingly was hit in the leg. Kentucky Attorney General Daniel Cameron said Mattingly and Cosgrove were “justified in their use of force” when they opened fire because Walker fired first.

Mattingly and Cosgrove were not charged. Cameron said they fired 22 shots that night. Six struck Taylor and “medical evidence shows that Ms. Taylor would have died from the fatal shot within seconds to two minutes after being struck.” Hankison fired 10 times. FBI ballistic tests showed Cosgrove fired the fatal shot, according to the attorney general.

Retired Sgt. Betsy Brantner Smith, spokeswoman for the National Police Association, said the officers were in a “very dangerous” and “dynamic” situation.

‘Laquan was walking away’

Among the recent convictions in police killings is the case against Jason Van Dyke, the former Chicago cop whose fatal 2014 shooting of Black teenager Laquan McDonald reignited the nationwide conversation about officer-involved shootings.

The shooting was captured on a grainy police dashcam video. Several officers responded to a call about a man breaking into trucks on Chicago’s South Side.

McDonald was initially seen in the video running, then walking in the middle of the street toward several police cars. He later veered away from two police officers with their guns drawn. He was carrying a knife and walking away from multiple officers moments before he was shot.

There were 16 shots fired over 15 seconds, all by Van Dyke. Van Dyke argued he fired in self-defense after McDonald lunged at him with a knife. The dashcam video — released by court order 13 months after the shooting — showed McDonald walking away, not charging at the officers.

Van Dyke was sentenced last year to six years and nine months in prison following his October 2018 conviction for second-degree murder and 16 counts of aggravated battery with a firearm.

“Different accounts of the incident led to differing opinions, but video ended reasonable debate: Laquan was walking away, presenting no threat to the officer,” Phillip Atiba Goff, co-founder and CEO of Center for Policing Equity, said at the time of the conviction.

Conviction in fatal shooting of 911 caller

In June 2019, former Minneapolis police officer Mohamed Noor was sentenced by a Minnesota judge to 12½ years in prison for the fatal shooting of a woman while responding to her 911 call.

Noor, 33, had been convicted on charges of third-degree murder and manslaughter in the death of Justine Ruszczyk, who had relocated from her native Australia to Minneapolis to live with her fiancé.

Ruszczyk had called 911 the night of July 15, 2017, to report a possible sexual assault in an alley behind her house. Prosecutors said Noor was sitting in the passenger seat, pulled out his gun and shot across the police vehicle to hit Ruszczyk, who was outside the driver’s side door.

Noor testified at trial that his partner had a terrified expression and the sight of Ruszczyk with her hand raised jolted him into action. Although he did not see a gun in the woman’s hand, he feared his partner might be shot as she began to raise her hand, he said.

Not guilty in shooting of unarmed man

A witness to the shooting captured it on video that was posted on Facebook.

Rose was shot three times when he ran during a traffic stop. Prosecutor Dan Fitzsimmons told the jury that video showed Rose running from Rosfeld and “causing him no danger whatsoever.” Rosfeld and his lawyer said the officer felt threatened and thought he’d seen what might have been a gun.

After hearing three-and-half days of testimony, the jury deliberated four hours and found him not guilty on all counts in March 2019. Rosfeld’s testimony swayed the panel. Rosfeld said he initially pulled over the Chevy Cruze because it matched the description of a car involved in an earlier drive-by shooting. The car with a shattered rear windshield was riddled with bullet holes when Rosfeld called in a felony traffic stop.

On the witness stand, Rosfeld demonstrated the hand motions he said he perceived as a threat to his life seconds before he fired three shots toward Rose and another passenger trying to flee.

Rosfeld acknowledged that he couldn’t say which of the two men was pointing what he thought was a handgun at him. He fired his gun in the general direction of both.

No charges for ex-officers in fatal encounter

And many cases never get to trial.

In Arizona on Monday, the Pima County Attorney’s Office declined to file charges against four Tucson police officers involved in an April incident in which Carlos Ingram-Lopez, 27, was killed. The death came to light in late June with the release of body camera video.

A report from County Attorney Barbara LaWall said prosecutors found “there is reasonable doubt as to whether the conduct of the officers here caused the death.”

Early on the morning of April 21, the officers were called to a home where Ingram-Lopez was found “drunk, yelling and running around the house naked,” according to police.

“Mr. Ingram-Lopez went into cardiac arrest and, despite the officer’s attempt to revive him, was declared deceased at the scene,” Magnus said.

“Without credible and relatively certain medical testimony tying the cause of death of Mr. Ingram-Lopez to the conduct of the officers, there is insufficient evidence to prove a crime of negligent or reckless homicide,” the county attorney’s report concluded.

The report said Ingram-Lopez’s death was from cardiac arrest “and that his enlarged heart coupled with the large amount of cocaine in his body and the stress of his interaction with police may have contributed to his death.”

Three officers involved in the incident resigned shortly after the video became public.

After the body camera video was released in June, Magnus said an internal investigation found the officers committed “multiple policy violations” but noted “that there is no indication of malicious intent.” He said the three officers did not “deploy strikes, use choke holds, or place a knee on Mr. Ingram-Lopez’s neck.”

The police chief did not specify which policies were violated.

Tucson Mayor Regina Romero said she was “deeply troubled and outrage” by the death and proposed a number of police reforms.