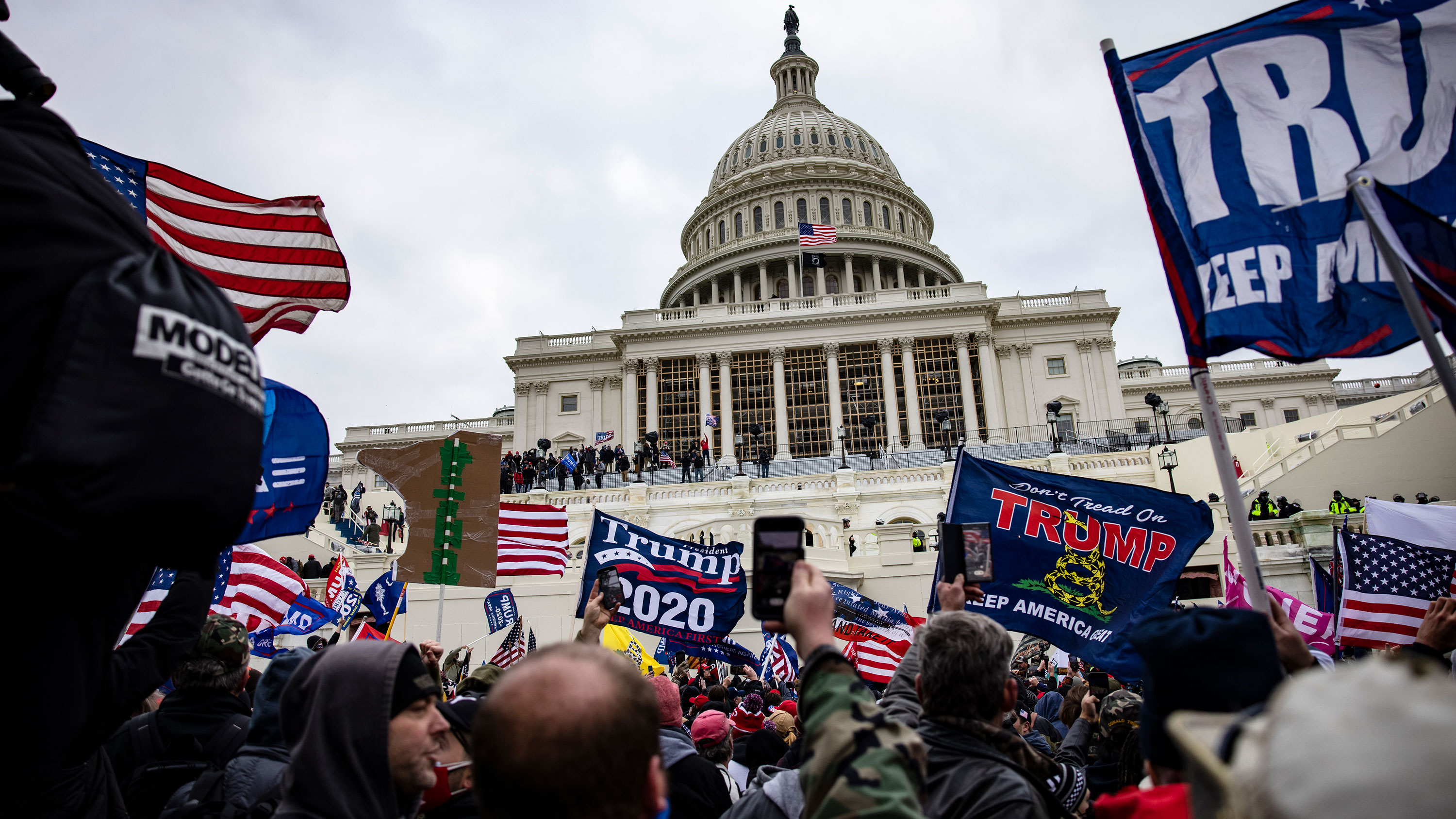 Before Proud Boys member Nick Ochs was arrested and charged in connection with the insurrection at the US Capitol, he raised $300 on the Christian-oriented website GiveSendGo.com to help get him to DC.

Following Ochs’ arrest, a supporter turned to GiveSendGo to raise money for his legal defense, a campaign that has garnered nearly $20,000 for the member of the right-wing extremist group.

The campaigns for Ochs weren’t the only controversial causes on the site. A CNN review found more than two dozen fundraisers related to protesting the outcome of the presidential election, raising travel funds to attend the January 6 protest in Washington and other right-wing causes.

Requests for comment from Alexander, Tarrio and Hoft went unanswered.

Though the money raised through GiveSendGo for extremists and other controversial causes “get a lot of limelight,” the company’s co-founder said the site hosts “thousands” of other campaigns that are in no way contentious.

Still, the site has emerged as an alternative fundraiser for those who have been kicked off — or shunned by — larger crowdfunding platforms, such as GoFundMe.

Jacob Wells, the co-founder of GiveSendGo, told CNN just because a cause may be unpopular it doesn’t mean a person shouldn’t have an opportunity to raise money from like-minded supporters.

He said the decision at GiveSendGo about whether to allow someone to raise funds on the site is focused on the two-pronged question of whether it’s legal and, if so, whether there’s anything in its stated goal that’s “derogatory to anybody.”

GiveSendGo’s terms and conditions prohibit any “abusive or hateful language” on its platform, as well as campaigns for “items that promote hate, violence and racial intolerance.”

“We’re not here to take sides,” Wells said in an interview with CNN. “We don’t necessarily condone on our platform a campaign any more than when you tweet on Twitter that Twitter somehow agrees with you,” Wells said.

Wells, who said he is a “Jesus guy” as opposed to someone motivated by politics, likened the decision to host campaigns for groups or people that some may find unsavory to a missionary looking to save souls in a brothel.

“As best we can, we’re going to represent the hope of Jesus in every situation to people who use our platform,” Wells said. “We’re going to cover it all with grace.”

Critics, however, say GiveSendGo and others in the tech industry enable extremists by refusing to take a firm stand against them.

The Proud Boys and other groups like them need “an architecture through which they can meet, recruit and finance themselves,” said Imran Ahmed, CEO of the Center for Countering Digital Hate.

“Big tech has not just made it easy,” Ahmed added. “It has turned a blind eye to extremist activities.”

“We want to limit the capacity of these groups being able to get money in any way,” he said. “Repeatedly, we’ve seen if the money is not there, the presence will not be there either.”

Hayden brushed aside extremist groups’ claims that their fundraising is protected free speech as a “slanted and corrupted” interpretation used to “vilify those who seek to limit their power.”

Not every company’s view on who can raise money is as charitable as GiveSendGo’s.

PayPal, for example, said it no longer provides services to GiveSendGo, citing unspecified violations of PayPal’s Acceptable Use Policy. But Wells told CNN it was GiveSendGo that cut ties with PayPal rather than adhere to its demand that the company not cater to certain clients.

“This is really coming down ideological lines,” Wells said. “We’re not just going to cut off one half of the population’s ability to espouse their ideas or desires because the other side yells at us to do it.”

CNN did not independently authenticate all the campaigns or verify whether the funds reached their designated recipients. In many of the controversial cases, the campaigns remained on the GiveSendGo website but the ability to donate had been suspended. Wells said that action was not taken by GiveSendGo; rather, he said, it was the result of third-party vendors in charge of processing payments or the individual administrating the account.

Not all the contributions on GiveSendGo are monetary. For folks inclined to give spiritual support, rather than financial, there is “pray now” button. The campaign for Help Storm the Captial (sic) Patriots Legal Defense, for example, got $10 from one anonymous donor, but received 12 prayers.

Many of the fundraising campaigns GiveSendGo supports are of the sort Wells envisioned when he co-founded the giving platform with his sister seven years ago: A scholarship in the name of a beloved coach. A child in need of surgery. Five hundred dollars for “cat supplies” for a disabled couple caring for 14 rescued felines.

The site exploded in popularity among the right over the summer when it began hosting a fundraiser for the legal defense of Kyle Rittenhouse, the Illinois teen charged with killing two people amid the unrest following the police shooting of Jacob Blake in Kenosha, Wisconsin. As first reported by the Daily Beast, GiveSendGo allowed the Rittenhouse fundraiser after it was banned by GoFundMe.

Rittenhouse claimed he was there to protect people and property from rioters and opened fire in self-defense. Prosecutors charged the 17-year-old with two felony charges of homicide.

While the case had a polarizing effect, Wells told CNN, “In my opinion, the media tried to paint a very one-sided story about what happened.”

Since launching the GiveSendGo fundraising effort, Rittenhouse’s supporters have exceeded their stated goal of half a million dollars, raising $585,940 from more than 13,000 donors, according to the website.

GiveSendGo has also provided a platform for a number of police officers involved in controversial uses of force, Wells said, including the police officer charged with killing George Floyd, an officer who pulled the trigger in the raid on Breonna Taylor’s apartment, and the Wisconsin officer who shot Jacob Blake. Authorities have since declined to file criminal charges against any officers for Taylor’s death or for the shooting of Blake. The officer charged with Floyd’s killing is awaiting trial.

Wells said GiveSendGo’s growing popularity has coincided with improved financial performance. Once “a labor of love” that made little money, he said he expects campaigns on the site to bring in $20 to $30 million in 2021, from which the company takes a cut of at least 3%.

Along with its increased popularity, the site has drawn additional scrutiny from the media, including in a recent article by The Washington Post about fundraising related to the Proud Boys and other controversial causes.

Eugene Volokh, a UCLA law professor who specializes in First Amendment issues, said there was nothing illegal — or, in his view, immoral — about GiveSendGo’s business.

“Whatever you might think about Kyle Rittenhouse, I hope we can agree that he is entitled to a criminal defense,” Volokh said. “If people want to help hire lawyers, in part because of their ideological views, that’s something that is constitutionally protected.”

Ochs, the Proud Boys member, charged in connection with the siege on the Capitol, did not return a phone call seeking comment for this article. He previously told CNN that he was working as a professional journalist when he entered the building, and that he didn’t go into any congressional offices or the chambers.

“We didn’t have to break in, I just walked in and filmed,” he said hours after the siege.

CJ Grisham, a Proud Boys member from Texas, who raised funds on GiveSendGo for tactical gear so the group can be “ready at a moment’s notice to protect our communities,” said the Proud Boys should be entitled to raise funds just like anyone else.

He said his fundraising campaign brought in nearly $5,000 for a cause he explicitly stated was nonviolent, but that he has so far been denied any money because a third-party vendor that processes payments for GiveSendGo decided his campaign was “too risky.”